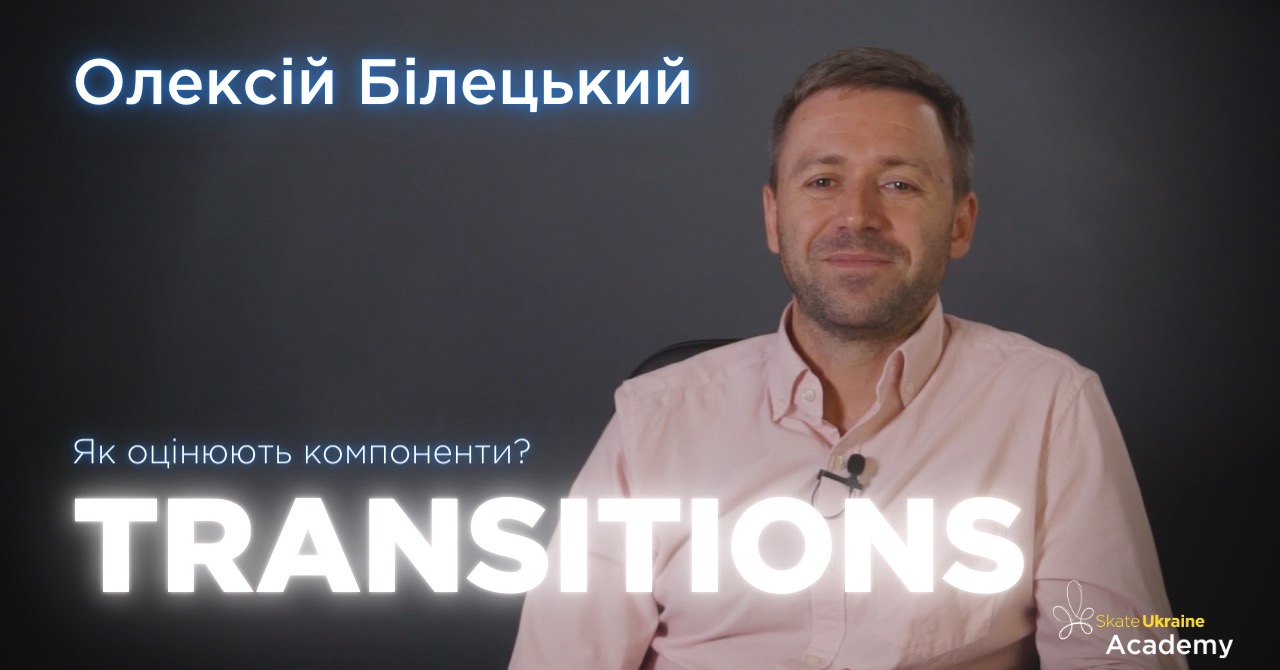 Dear friends, I’m Oleksiy Biletskyi, a figure skating official, ISU Judge in single & pair skating and ice dancing. I have officiated more than 50 events, including World and European Championships. As a skater, I took part in 2002 Winter Olympics in Salt Lake City.

Here I continue discussing how we judge, see and mark skaters’ performances. Understanding what and how we do will help you make your programs better, more interesting so we, the judges, mark them higher.

If you want to make your results better – watch this video!

Today we will discuss Transitions.

They are connecting steps, positions, movements and holds between the elements.

There are four defining criteria:

And we evaluate them on a scale from 0 to 10 points in increments of 0.25 points.

On the web you can find the Chart created by the ISU with a colored evaluating manual:

And we put these marks counting the percentage of criteria completed according to the program timing. Later I will show the example.

Now there is the first criterion.

CONTINUITY OF MOVEMENTS FROM ONE ELEMENT TO ANOTHER

How do we recognize it? When the program looks like a continuous spectacle. Integrating difficult elements like jumps, spins, step sequences to the program to create this spectacle, enhance the effect from it. Such program creates the feeling of continuity – a spectacle from start to finish.

There are some moments that can break the performance:

I need to say that transitions include not only steps but also arms, legs and body movements.

Variety of steps, turns, positions and holds (in pairs and ice dancing)

How can you make them various? The blade has not only two edges but also the heel and toe parts. You can do turns and leaps on them. They may not be difficult movements, but they will meet the variety requirement. Tere are also lunges, spread eagles, ina bauers, spirals and their variations.

Variety of holds and positions in pairs and ice dancing .

Variety of positions and short lifts. Create something unique, your own original element – within the rules, please!

You can do difficult steps and turns holding the body straight and adding leans using the legs, arms and your head. So the movements become spacial and difficult.

You can do a simple step or a turn but do it leaning the body or straightening your arm or leg sideways. Then this movement can become unique and difficult, because you need a balance. And this will raise your Transition mark significantly.

Elegant and balanced execution of turns, steps, movements and their combinations.

What else can raise the mark for this component?

Movements, steps, execution quality – and all that has to be remembered. And even better – be unique. Then your mark will be high.

It is different like the skaters’ level. Different skaters do steps and turns according to their level. So, we have different quality and different levels of skating skills and body control.

As I have told, the program that looks like a spectacle from start to finish, have a continuous action with difficult and high-quality execution of various movements, steps and turns will receive higher Transitions mark.

It will raise the Transition mark and the originality of the program in general. So it will be the best way to show strengths and abilities of the skater.

What did Patrick demonstrate here?

Let’s look at our criteria:

So, after adding all the criteria for Transitions Patrick will receive 9-9.25 points.

Tonya Harding – the skater who had some of the best jumps in the 90s.

And the Transition mark for Tonya after adding the criteria will be 5.5-6.5 points.

Good luck to you on your practices and competitions, and remember – the best one wins! Practice well, and the result will come! Watch the video, ask your questions – there will be more interesting and useful stuff here. With the love for the sport, Oleksiy Biletskyi!