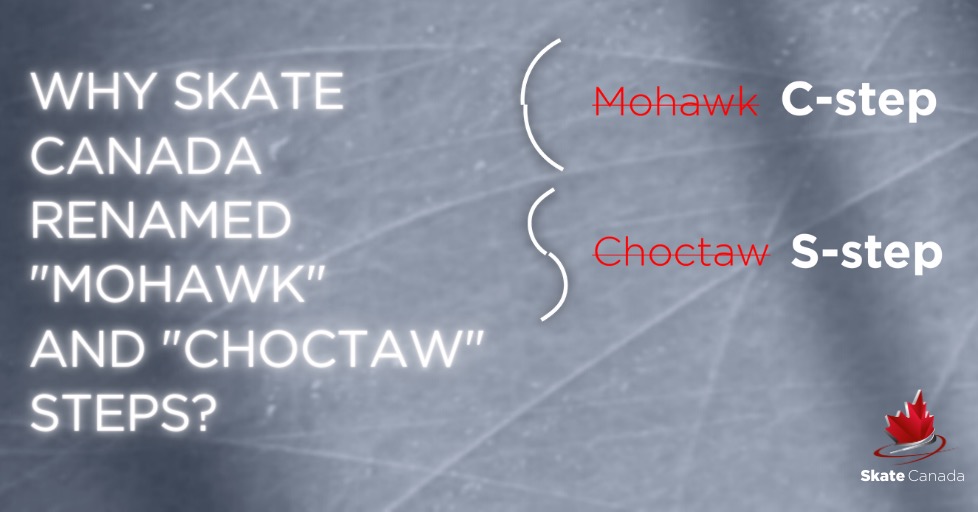 Terminology change is not something that happens in the figure skating world regularly – especially for more than a century established terms.

In Skate Ukraine we wholeheartedly support the global movement towards increasing inclusion and diversity, and express our support for this bold move by Skate Canada. At the same time, we feel like topics of diversity and inclusion aren’t particularly well-understood in Ukraine. So, we see a need to communicate the reasons behind this change and make it easier to understand for people who are not familiar with the history of North America and indigineous people in Canada. We hope that after our little dive in, this terminology change will make a bit more sense to some people.

First, a little refresher. Mohawk (or “mohawk turn”) is one of the basic steps figure skaters learn from the very beginning. Technically, it’s any step where a skater changes their foot (i.e. left to right) and direction (i.e. forwards to backwards), but not the edge (inner/outer). Likewise, choctaw (or “choctaw turn”) is a step where a skater simultaneously changes foot, direction and the edge of the blade.

Most of the basic figure skating steps are named after the shapes they’re resembling – 3-turn, loop, bracket turn and so on. Mohawk turn and choctaw turn are outliers in this naming pattern, but where do these names come from?

Mohawk and Choctaw are the names of the Indian tribes.

SkateGuard blog wrote an excellent article about this - “How The Mohawk Got Its Name”. We encourage you to read it fully, but here is a gist.

As you probably know, Indians were the native people of North America, and then colonization happened, followed by a few centuries of horrendous wars and injustices. After decades and decades of bloodshed, Native American tribes were defeated, and white Americans saw them far more as an attraction than as a community of people with an historic right to live in their country. At some point fascination with the American Wild West, cowboys and Indians became a cultural thing among the general public, and Wild West shows started to emerge in England and the US, where captured Indians were performing War Dances for paying spectators.

It was around that time when British skaters visited these shows and probably noticed similarities in steps of Mohawk and Choctaw Indians in their war dances to what they were performing on the ice.

Currently, Mohawk and Choctaw are indigenous people who live in North America. The term “indigenous peoples” may be not very well known outside the US and Canada, as it’s relatively new, but it essentially means the ethnic groups who are native to some land. In modern Canada and the US it is widely used, and the topic of restoring historical justice. There are currently more than 1.6 million people in Canada alone who identify as indigenous peoples.

Language often evolves in peculiar ways – but by the 21st century we’ve learned that words do matter.

Words’ choices influence us in a subtle unconscious way – steering our choices in one direction or another. Some words – that we now call discriminatory language – can reinforce the disadvantage that various groups of people experience. For example, using “businessman” in advertising as a synonym for people in business unconsciously reminds us that the business world is largely dominated by men. In subtle and almost invisible ways it solidifies the status quo of one group dominance over another.

The common trend in modern society is to recognize such discriminatory language and attempt to move away from it, by choosing better terminology that is not discriminatory. For example, in software development industry there is a movement to ditch the “master/slave” terminology and replace it with "primary/secondary", and in media publications the extensive use of “he” to refer to any person, or “man-hours” or “cameraman” are being replaced with “he/she” or “they”, “person-hours” or “hours of work” and “camera operator” respectively, and so on.

Using terms mohawk or choctaw in figure skating doesn’t mean we’re consciously discriminating indigenous peoples. Not at all! The absolute majority of people (including us) normally don’t even think about etymology of everyday terms, and don’t see any discrimination here. It’s just a term, right?

But not for indigenous people. As was mentioned earlier, there are around 1.67 million people in Canada alone belonging to this group. They deserve the right to feel the same level of respect and comfort in figure skating as anyone else. Ice skating should not be a place for reminding them the horrendous history of indigenous people oppression. Here is what one of the roller skaters from indigenous peoples community  wrote on Reddit after seeing the news:

As an Indigenous person, this gave me a sigh of relief. It takes so incredibly long for companies, schools, organizations, etc. to change racist/offensive terminology and imagery towards Indigenous people that it's actually shocking when it finally happens.

Generally speaking, it is never okay for non-Indigenous companies, groups, people, etc. to use Indigenous imagery, names, stereotypes, etc. We have been oppressed by colonization for centuries in such horrific ways that many of us have been severed from our cultures in some way or another (practicing any Indigenous ceremonies, speaking our languages, etc. was made illegal or at least very punishable so there are entire generations that grew up without knowing crucial elements of their cultures and, consequently, couldn't pass on those teachings to future generations – i.e. me and my contemporaries).

It is painful to see aspects of our cultures trivialized and made into inaccurate and offensive caricatures (think: sports team and school mascots, Halloween costumes, names of companies or products, and in this example, names of skating moves).

Now, coming up with a better non-discriminatory term is not an easy task. First, there is a predictable backlash over terminology people are used to. It’s inevitable and can be only softened with proper communication of the reasons for change and patience until it reaches wider adoption. Second, sometimes there is no good alternative.

But not in this case. The terms C-Step and S-Step proposed by Skate Canada seem to be quite a good choice. It’s not only short and concise, but the letters themselves resemble those steps on ice – something we are used to in other steps’ names (3-turns, loops, brackets, etc). Clean and elegant. 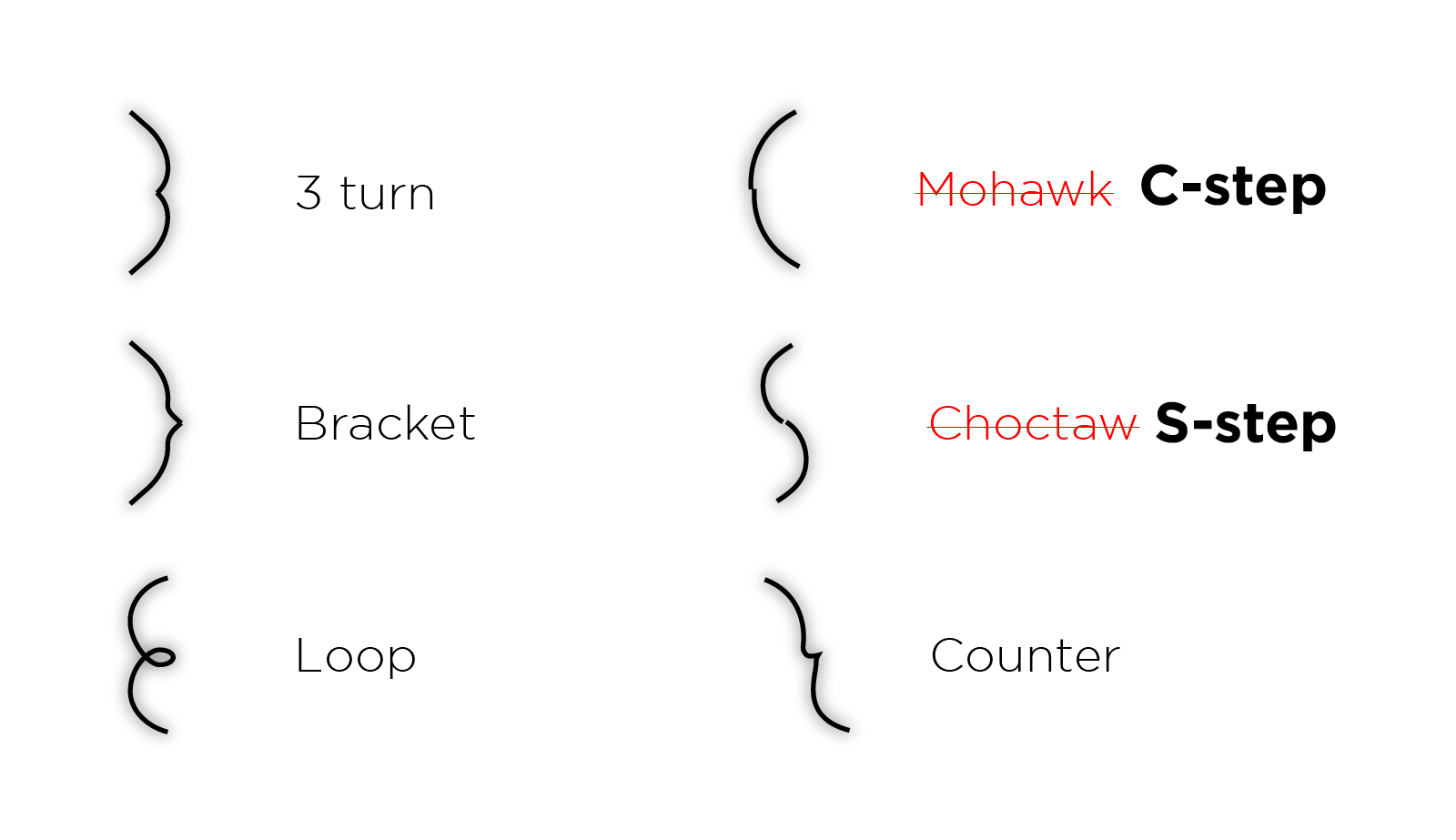 As these new terms are going into the Skate Canada documentation, it’s simply a matter of time when it becomes natural and familiar to use those terms, at least in Canada.

In Ukraine, however, this choice is far from optimal. Latin "S” is transliterated into Cyrillic “C”, and it’s a common confusion when a Ukrainain-speaking person tries to guess which “S” another person is referring to in English (“did you mean "S" like our "C", or like English "S"?").

In Skate Ukraine, however, we will use the terms C-Step and S-Step in English versions of our future publications and documents. For the Ukrainian and Russian versions, we’ll probably have to bring in some collective creativity and find a better alternative for the future.

We hope this little dive-in helped to understand the terminology change. And our big shout out goes to Skate Canada for leading this change and for willing to make the world a little bit more friendly for all of us.

What's your opinion on this topic? Do you have an idea how to name it in Cyrillic-based languages? Let us know!