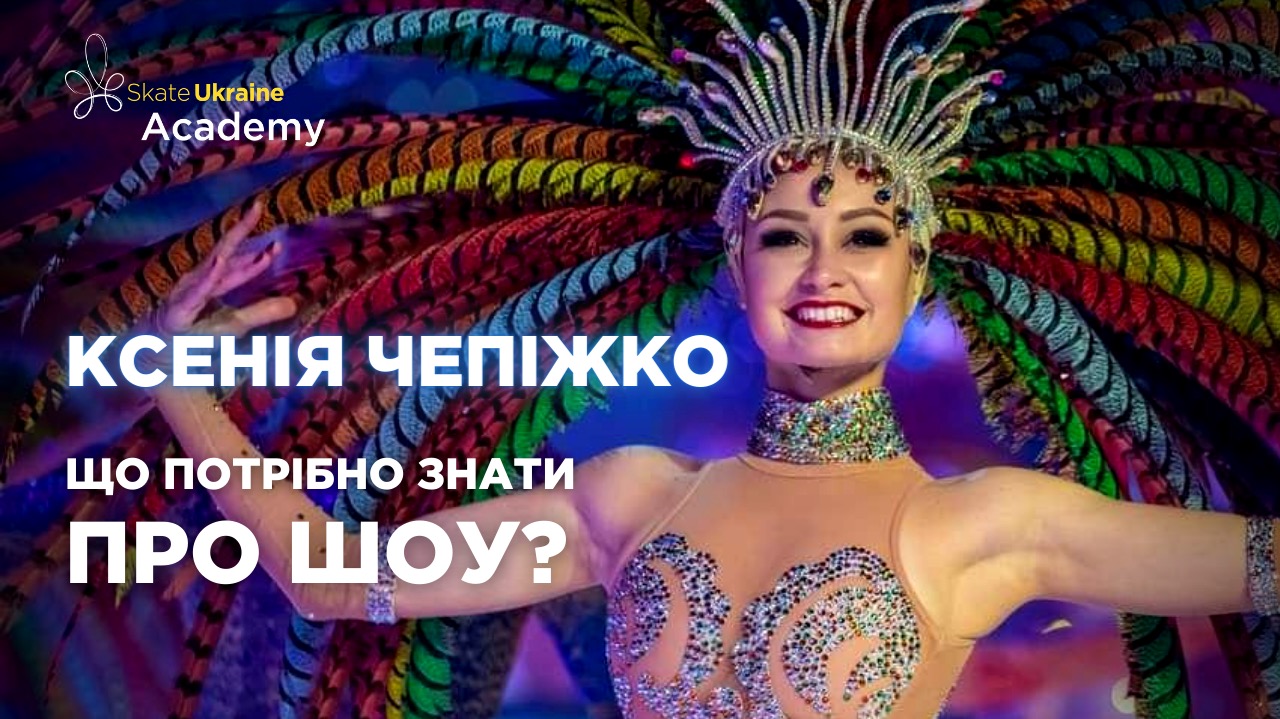 In a first Skate Ukraine Academy video, Ukrainian figure skater, ice dancer Kseniya Chepizhko shares her experience of working in an ice show. She talks through the most important questions, for everyone who plans to start their career in an ice show.

Kseniya Chepizhko has been working in ice shows for seven years, six of which in Holiday on Ice. She’s also served as a team captain for the past four years, and ready to talk about work in shows for hours. In this video she explains how show system is structured, describes cons and pros, tells how to find and apply the job in a show, goes through the most common mistakes of newbies and many many more.

We've gathered key points from the video below:

Cast of the show includes:

People working with the team during the tour:

Pros of Working in a Show

Firstly, travelling. During the tour, you’ll most likely visit about twenty or more cities. In addition, organizations such as Holiday on Ice usually have deals with other similar companies specializing in dance shows. For example, we were offered free tickets for such shows as Moulin Rouge, Lido, and The Lion King. And vice versa, the artists of these shows were able to come and see us perform. This leads to new acquaintances, invitations to backstage, and opportunities to share opinions.

Next advantage is building connections. You’ll get into a cast of 20-30 people, half of which had most likely worked in shows before. Sharing experiences will help you find out how to get into other shows, what requirements they have, what conditions, obstacles etc. Being a part of a show just once will bring you so many connections and information that you won’t wonder who to write to and which way to turn in the future.

Another plus of Holiday on Ice is working with professionals. I’ve skated on the same ice with Olympic champions and other awesome skaters, Marina Anisina and Gwendal Peizerat, Valentina Marchei, Aljona Savchenko and Bruno Massot etc.

Apart from skaters, everyone who works with us, including designers, creative directors, and choreographers, are established people with unique approaches. I’ve worked with people who’d created costumes for shows at the Friedrichstadt-Palast in Berlin and collaborated with Valentino, staged Broadway performances and the 2012 London Olympics’ closing ceremony.

The show itself is also a positive experience. When you perform in front of the 2-5-thousand crowd and hear all of them applauding, it’s an indescribable feeling.

Living in hotels could also be on the “pros” list. Usually, it’s four stars, in a nice neighbourhood, with good breakfasts and comfortable rooms.

Living in hotels, again. As much as hotels can be great, they can turn out equally bad. Especially in France, where rooms are minute (keep in mind that you never live alone, always with a roommate, plus you need some space for the luggage, skates, etc.), and the walls are extremely thin. There were times we couldn’t sleep because of the noise.

Among the downsides are long drives. Before you get your hopes up, we don’t travel on private jets. We have one big bus, often a double-decker, for 60-70 people (in addition to the cast, there is a great number of people working backstage). Unfortunately, the destination won’t always be the closest city. You’ll travel all over the country, and each drive will take 8-9 hours, sometimes 10-11. However, you’ll always make stops. Europe has a rule for drivers to take a break every four hours. So, you’ll get to stretch your limbs.

During the Holiday on Ice tour in Germany, you’ll travel every Monday. Every Monday and Thursday in France. Having this schedule for three months with almost no days-off is exhausting.

The least unpleasant parts of touring for skaters are so-called three-packs (three shows in one day), six-packs (two three-packs in a row), and nine-packs (three in a row). It’s very tough, both mentally and physically. Each show lasts for two hours, and you have to be on the ice about an hour or 1,5 hours earlier to be in time for the meeting and get ready for the show. There is a 1,5-hour break between the shows. But don’t forget that French spectators are often late, thus you won’t finish in time either. The workday may start at 10 am and end around midnight.

Other difficulties include rehearsals. Usually, they take seven weeks before the tour opening. We live and practice at a training camp in Belgium. Rehearsals are conducted from 8 am till 6-9 pm, depending on how much you’ve got to work on.

You’ll have to do your own hair and make-up. Whether you’re a girl or a guy, it doesn’t matter. If you don’t know how, you’ll learn. Someone will help you, another skater or the designer, who creates the look, or anyone else. You are required to come with your own make-up kit (you’ll find details on which kind of make-up in your contract). I recommend bringing your own hairpins too, since they won’t be given to you either.

Each show is absolutely different. When you sign the contract, no one can guarantee how much you’ll like the project or not. I’ve had shows I couldn’t wait to be done with. I’ve had shows I loved with my whole heart. So much that I didn’t want to go home. But it’s work. You might want to do dozens of axels or lifts, but it’s just not what they need in this particular show.

Every organization has rules: how to look after costumes, how to behave, when to show up for practice, etc. Once you’re on the show, you’re building your image and reputation. It’s in your own interest to do what they ask. Just take it seriously. No one will care if you underrotate a jump, no one will give you marks, but your work will still be judged.

For example, if you’re in the ensemble, they will keep an eye on the mood and delivery with which you skate, and on your ability to engage in the work. All of it will be put in your personal file, which will be discussed at the end of the tour. If you’re a principal, they’ll pay attention to your consistency. There is always accountability for how many elements you’ve done wrong or bombed entirely.

You’ll have four test weeks starting from the first day of rehearsals. If during this time you decide this work is not for you, you have a right to quit without consequences. Meanwhile, the company has the same right. If they’re not satisfied with what you’ve got, you can be fired with no explanation.

Moving on to food, during the rehearsal period, we eat at the camp according to the schedule. You’ll be charged 10 euros a day, regardless of whether you eat or not. During the tour, you’ll have breakfast at the hotel. You’ll have an option to buy your own lunch and dinner elsewhere or use the catering service. We travel with cooks, who can make any meal that exists and sell it to you.

We don’t have a physio. So, in case of an injury or anything of that sort the top manager will find a doctor for you.

Learn English! You’ll work with people from all over the world, and the language of work will be English. All the rehearsals, safety briefings, and any communication will be in English. Quite often, people who come to work on a show don’t speak a word of English and don’t understand it. However, in some shows, you won’t get a job until you do an interview in English.

You’ll always find a person who can translate something to you, but you’ll just waste everyone’s time. They don’t like it in the office, and it won't get you the kudos. You’ve got to know at least some basics. And don’t be afraid to make mistakes. People will appreciate that you’re at least trying to speak English. Learn and practise.

Read the contract! You’ll receive two documents, a set of rules and the contract itself. Read both. They contain a lot of details and rules that the company will follow and apply. If you don’t know something because you haven’t read about it, it’s going to affect your reputation.

When applying for a job on the show, you must send a video with all the elements you can do. Many people send recordings from two or three years ago and then, when they arrive and are asked to show the elements, it turns out they can’t or are afraid to. Skaters get fired for this and are not welcome to work there again in the future. The management will have to find a replacement, so it’s bad both for you and the company. Send a recently filmed video of those elements you can easily perform a hundred times a day and at any time, elements you love and feel sure about the most. For my video, I had to get rid of a lot of elements which I can still do, just because when I constantly do them on repeat in a show, I start to feel pain. For instance, I used to do a biellmann, and it affected my back. So, I don’t include it anymore.

How to Get on the Show

Every big organization, such as  Holiday on Ice, Disney on Ice, Cirque du Soleil, and Royal Caribbean  has a website, where you can easily find contact details. You’ll need to send an e-mail introducing yourself and adding a few photos and a CV.

List all your accomplishments, titles and tournament participations in the resume. These will be a great advantage. Add files of or links to your videos. If you haven’t skated competitively for a while or if you used to skate with another partner, it’s better to film a new video. Don’t make it too long showing the same thing from different angles. Make a 1 or 1,5-minute video doing each element once.

Show season usually starts in September-October and ends in May. Thus, it’s better to send your CV in May or June, when the previous cast has already finished the tour and gone home, and the companies are developing new projects. The answer may come either within the next few days or after a whole month. The terms vary.

How Much Do Shows Pay?

For those who will be applying for the first time I urge you not to dicker, when you get the contract and see the proposed salary. I know you want more, but you’re new to this organization, and they don’t know what it’s like to work with you yet. Once you’ve build up your reputation, you’ll be able to sell yourself for a higher price.

Each skater’s salary is discussed individually. Ensemble has a more or less fixed and equal salary. As for principals and semis, it depends on the number of their performances, elements, titles, accomplishments, and the years they’ve dedicated to the organization. It’s unlikely that someone will tell you how much they’ve earned exactly. Plus, it’s written in the contract that this information can’t be discussed. But I can at least tell you that a member of the ensemble gets no less than 500 euros a week.

We pay taxes, or rather our company does. The sum may differ. From my experience, Germany had the lowest taxes, and France and Austria had the highest.

You’ll get a bank card to get the salary on. However, if you already have a European bank one, you may use that.